The conference planning committee is proud to announce that the 2021 Annual Conference keynote speaker will be Von Washington, Jr. from the Kalamazoo Promise. 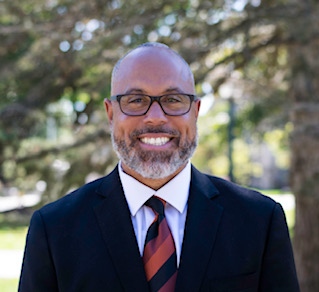 Von Washington Jr. certainly understands the value of an education. Growing up the son of a college professor and professional actress, Von has been exposed to his parents’ love for and expertise in written and verbal communications for as long as he can remember. As executive director of community relations for The Kalamazoo Promise, Von is tasked with being the spokesperson for The Kalamazoo Promise, which includes responsibilities to key community stakeholders, media relations, and promoting a system of communication and information around a common vision of becoming an education community.

Prior to working with the Kalamazoo Promise, Von was an associate-vice president at Southwest Michigan First and concentrated his efforts on business development by partnering with existing regional companies on their job creation efforts. On behalf of the organization, he was also responsible for developing collaborations between educational institutions and businesses in order to best prepare the region’s future workforce.

Von arrived at Southwest Michigan First from the Kalamazoo Public Schools where he served as principal of Kalamazoo Central High School from August 2007 to July 2012. While there, he enjoyed a visit from President Barack Obama who selected that school in 2010 at which to deliver the first-ever presidential commencement speech at a high school for its winning entry in the
Race to the Top Commencement Competition.

Von holds a bachelor’s degree from Western State College of Colorado and a master’s of Educational Leadership from Western Michigan University.

Keynote description
In 2005, a group of anonymous community members recognized the financial barrier that tuition created for accessing post-secondary education. They anonymously started a scholarship fund, the Kalamazoo Promise, for graduates of Kalamazoo Public Schools to circumvent those burdens. Since its inception, the Promise has helped over 8,000 KPS graduates pursue higher education goals.

Join Von Washington, Jr., Executive Director of Community Relations for the Kalamazoo Promise, as he shares how he, a former children’s librarian, built community through programming and partnership. We will hear how that same sense of community building is integral to the success of creating a community of future learners through the Kalamazoo Promise.